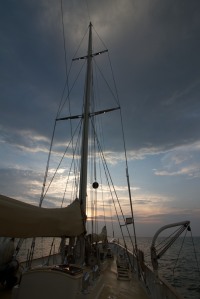 Gulf of Thailand off Pattaya

On Tuesday the 15th I met Jim at his apartment and we caught a cab out of town to meet Argo. We headed South East towards Pattaya. Bangkok is immense and the trip out of town took quite some time. Finally, the urban gave way to the industrial and then the industrial to the rural. The undeveloped areas surrounding Bangkok aren’t much to behold from the highway. The river delta upon which the city is built is flat. The towns surrounding the city are barren and downtrodden. Eventually, we came upon a hill. Cocoanut plantations lined the highway for a period. Mountains were visible in the distance, though largely obscured by the ubiquitous haze. After all to short a period we transitioned back to urban, Pattaya. 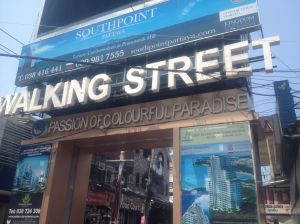 Pattaya’s famous Walking Street. You can guess what goes on here.

Pattaya is a resort town on the Gulf of Thailand. It developed from a sleepy fishing village to a holiday destination thanks to Vietnam era GI’s on R&R. After joining Argo we anchored in the bay and shuttled in her crew for a day off. I stayed on board to stand watch. The city oozes sleaze. This was palpable even offshore due to the foul smelling slick that emanated from the coastline after it rained. I felt unsettled and strongly desired to move on. It may have just been the heat, but I was uncomfortable. The tide flowed in and out of the Gulf through the bottleneck created by the promontory on the mainland and islands just offshore. The water’s flow was immense, but the tides seemed jaded, as if consigned to their fate to flow back and forth past this eyesore evermore. 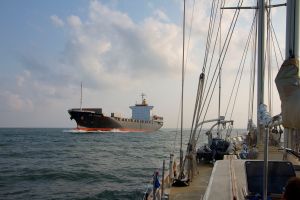 On the 17th we pushed North to Bangkok and anchored overnight amidst container ships waiting pilots at the river mouth. At last on the 18th we brought Argo up into the river. We docked her with the (unnecessary) aid of two tugs in the Thai Royal Navy Yard. This shipyard is the only local one deep enough to accommodate Argo, though the workers from Marsun Shipyard, who built her,    will have to be shuttled across the river each day. Thus began two stifling days of removing rigging in 95+ degree direct sunlight. On Monday her masts come out and from thereon I should get a feel for what refit life will be like.